The Man Behind The Serial Killer

It was in 1989 that my life collided with the world of the serial killer.

At the time I was in high school, dreaming of performing on the world's stage as a dancer and singer. I was a lot smaller then compared to now but then my life was one of adrenalin and music. Every waking moment was spent dancing, singing, playing instruments, or anything that came under the umbrella of performing.

Dance, drama and performance would remain part of my life for another four years, but it was slowly consumed by a darker world, I guess you could call it the world behind the curtain.  I lived in Sydney. One of the most beautiful places on earth and a place that will always be home, but in 1989 it was also the home to a serial killer.

In early 1989 an elderly lady was found bludgeoned to death. Her murder was reported in the media, as most cases of murder in Sydney are, but she was the first of at least six women who fell prey to the killer known as The Granny Killer. At the time, criminal profiling in Australia was in its infancy and an attempt was made to profile the serial killer. The profile claimed that the killer would be a young man, probably a skateboarder. However when the killer, a 50 year old man, was captured, my whole world seemed to circle in around me.

The idea that the serial killer was a genial older gentleman was incredulous. I could not believe it, he looked like my own father. He actually was a father, to two teenage girls.  I was hooked at that very moment. No more did I believe that killers were the Freddy Kruegers of this world. They were the fathers, the brothers, the uncles and even the mothers that walked among us.

This was how my 'life of crime' commenced. Gone went the dancing costumes and performance ideas, and instead, in their place were criminology exams and interviews with serial killers.

Since my new career path started I have interviewed dozens of serial killers, but nothing I have done will ever compare to that done by the serial killer expert himself Robert Ressler.  Along with another hero of mine, John Douglas, Ressler has interviewed the most infamous serial killers in America. He has, as he put it, looked into the abyss.  His numerous books taught me more than my university degree ever could regarding the criminal mind and the way it worked.

I have had some pretty exhilarating experiences with serial killers over the years, including death threats and recipes where I was one of the ingredients, but had it not been for Ressler, Douglas and their co-horts, would I be looking into the abyss now? Would my life be the one it is  with eight books on true crime published and many more to come? Serial killers have always been a part of history, and always will, but it was the need and ability to understand the mind of a killer that has compelled many of us to peer over that edge and to see what stares back.

Ressler passed away earlier this year, but for those who walk in the shadow of serial killers, he will forever live on. 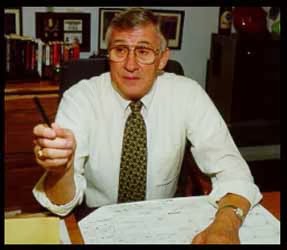 Posted by Amanda Howard at 1:41 PM