This week, I am interviewing author J.M. Peace.

J.M. Peace is a serving police officer who would rather be an author. She writes her police procedurals with the voice of authority. Her first novel 'A Time To Run' was released in July 2015, with the sequel 'The Twisted Knot' released this year.

Thank you for joining me this week for an interview J.M. 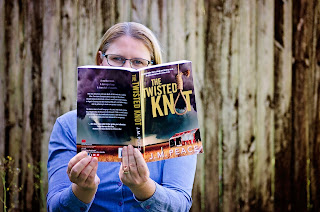 Can you tell us a bit about you as an author?
I’m a police officer who would rather be an author. I’ve been a copper for sixteen years, so crime was the logical choice when I sat down to write a book. Having a book published was the realisation of a lifelong dream, and I’m working towards giving up my ‘day job’. I’ve had two novels released by Pan Macmillan. They are both police procedurals, making the most of my ‘voice of authority’.

What are the hardest part of being an author?
For me at the moment it is finding the time to write. I have two young children and find that juggling family responsibilities and work with writing is a big challenge. I still treat it as a hobby and it tends to get jammed into the cracks of my life.  And then when I do find time, the second hardest part is not getting distracted…

What do you enjoy most about being an author?
I most love it when the characters take on a life of their own and the story seems to unfold of its own accord. It is this creative process that I most enjoy about being a writer.

Do you ever get Writer’s Block? If so, how do you deal with it? Do you believe there is such a thing?
Although the volume I write fluctuates dramatically depending on what else I have going on, I don’t really get Writer’s Block. I let myself take breaks when my head is not in the right place for constructing the story. My favourite writing saying is “you can’t edit a blank page”. I will often just write anything in order to get words on the page and start the flow. Once I get writing, it normally triggers ideas and I can keep going.

How do you like to reach your readers? (Social media? Book signings? Blogs etc)
I’m a little hamstrung by identity problems. I write pretty much anonymously under a fake name because I am still a police officer and need to keep that job in order to pay the bills. There is a potential conflict of interest with me writing crime. Although my stories are fictitious, I have knowledge of the inner workings of policing. Before I signed the contract with the publisher for the first book, I attempted to clarify my position with my bosses and the union, but no one seemed entirely certain on whether there would be a problem. So I just attempted to bypass it all by pretending not to be me. It’s a bit odd, and keeps me away from public appearances.

Can you tell us about your latest book? (is it part of a series, genre) 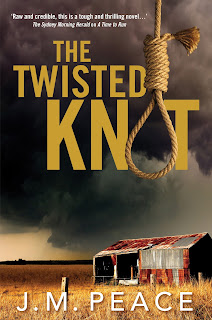 My latest book is a police procedural called ‘The Twisted Knot’. It is the second in the series, following loosely on from my debut ‘A Time To Run’. The lead character is Constable Sammi Willis who polices in a small (fictitious) town in Queensland. In ‘The Twisted Knot’, she gets caught up in the suicide of a local man suspected of sexually abusing young girls, and has to sort out the facts from the rumours to unravel what really happened.

How long did it take you to write the book?
I worked on this book under a tough deadline from the publisher whilst editing my first novel. The initial draft I submitted was rushed and confused. I had to rip 30,000 words out of it and re-write them. So the editing process probably took even longer than writing the initial draft.

Do you have a favourite character/topic in your work?
I find it intriguing writing from the offender’s point of view in each story. It’s interesting to try to understand what motivates people to commit a particular crime and how they justify it to themselves.

What was your process? Did you plot out the entire book, or just let the storyline flow?  Do you write in chronological order?
I have been making a conscious effort to try to plan, but my mind just doesn’t seem to work like that. I start with the crime or conflicts in the story, then build the characters and sub-plots around that. I write segments as they occur to me, which is rarely in chronological order.

Do you have plans for further installments?
I’m currently writing the third book in the series. It begins with a death in custody and the resulting fallout at both the police station and within the small town community.

Ebooks vs Physical books? Do you have a preference when reading?
Physical books always. Although I have an ebook reader, I don’t often use it. I’m not very good with technology and my kids aren’t quite old enough to sort things out for me. Also there is nothing quite like holding a paperback in your hands. Especially with your name embossed on the cover – even if it is a fake name…


I have had an easy run getting published and I think one of the reasons was my ‘backstory’ as a police officer. My advice is to find the story that you are the best person to tell.

Thank you so much for visiting today J.M. I don't know about anyone else but I am a little intrigued. I used to work in the Police Service myself and I wonder if I might know you.

Anyway, whilst I go to do some detective work myself, I want to thank J.M. for dropping by.

If you're interested in checking out her books, you can find her here....

Thank you again everyone for dropping by. If you'd like to be interviewed on this blog, please drop me a line.  Please don't forget to subscribe for further interviews.