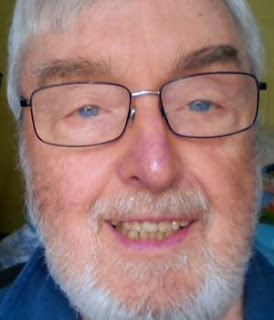 This week I am interviewing filmmaker and author, Brian Kavanagh. I have to admit I am having a bit of a fangirl moment here!  How is this for a resume?

For all my life I was a filmmaker, working on feature films, documentaries and TV dramas, so effectively I was always a story teller. My main area of production was as an editor which entailed shaping the final product. An editor should have knowledge or appreciation of the arts, as they all come together in the cutting room, and knowing how to utilise them to the best effect in creating and telling a story. This also included writing film scripts, so it was a natural progression to branch out into writing novels. So far I have limited my writing to mysteries, light entertainment, but with (hopefully) characters that come alive for the reader. I enjoy writing my mysteries, as the central characters, Belinda Lawrence and Hazel Whitby, have become close friends and we collaborate as each new adventure presents itself, and I discover more and more about their personalities and emotions. Each mystery is character driven and centred on some historical event or object which is at the core of each contemporary story. I have another novel I’m working on which is not a mystery, but an exploration of sibling differences and the possibility of reincarnation.

What are the hardest part of being an author?

I wouldn’t say there is any part of writing that is hard. There can be frustration if a character refuses to be open with you and allow you to know them. Searching for the right word which remains elusive. Ensuring the pace is right for each scene and how it fits on the overall rhythm of the story. Irritations rather than ‘hard’.

Satisfaction if I think the story works, meeting new characters as they appear, plotting the action, creating a mood or atmosphere, finding humour in a situation and building on it, editing and improving. All of that, plus positive reviews from readers who are on the same wave-length the stories are pitched at.

How to answer that? I imagine every book I’ve read has had some influence on me, some lasting, and some ephemeral. But authors who I admire and return to are Evelyn Waugh, Iris Murdoch, and E.F.Benson. When younger I read the classics when I could as well as contemporary authors of the time, John Steinbeck, Gore Vidal, Hal Porter, Truman Capote et al. Agatha Christie of course and I recalled only recently that at an even younger age I read Sexton Blake mysteries, so I guess I’ve always been attracted to mystery novels as a genre and now with the i/net I’m discovering more and more early mystery writers and their works. I have a fascination with the works of Fergus Hume, whose novel Mystery of a Hansom Cab was a huge international success at the beginning of the 20th century, and I have collected many of his works over the years. So I have to say all of these great talents have influenced me in one way or another.

Writer’s Block. It can happen, if you believe it stops an author from writing at all. Otherwise, there can be a point when inspiration fails or a plot twist creates a problem for which there is no swift resolution. When and if that happens, I walk away; wait for the answer to emerge, which it will. The point is not to dwell on it and eventually things will clarify and you can see the resolution. One of the characters in the story may tell you. I know I go on about listening to the characters, but they have to be real for me because if they not, they will not be to the reader.

I write in what I call ‘the study’; but it is just a spare room full of bit and bobs and me at the computer. But writing is not confined to the computer or the room. The mind is always writing and hopeful those words will be incorporated in the story.

Most of my contact with readers comes via FaceBook. I use Twitter but that seems unsatisfactory to me. I like the response and contact I have with readers via FaceBook, not only about the books but information we exchange about our lives and friends. It brings a closeness that I appreciate and an understanding of my readers with their likes and dislikes. 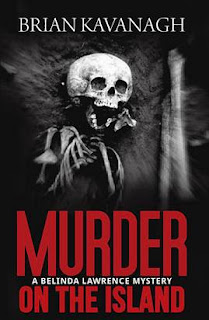 My most recent book is MURDER ON THE ISLAND, which is the sixth book in my Belinda Lawrence amateur sleuth series.

Difficult to tell as I don’t work to a deadline, unless I set one for myself. On average it takes about six months from inception to final draft and publication.

I would have to say Belinda’s cohort, girl Friday, ADC, Hazel Whitby. As much as I like Belinda, Hazel is worldlier (maybe even world-weary) inclined to be outrageous yet attuned to contemporary fashions and ‘having a good time’. It is interesting that Hazel appears in the first book, CAPABLE OF MURDER more or less as a supernumerary but when writing the second book, THE EMBROIDERED CORPSE she was at my elbow nudging me, flirting, seductive, and eventually won me over. Hazel is a good foil for Belinda and the two women bounce off each other with opposite personalities and tastes. Belinda developing and unsure: Hazel who has seen it all, but still has her radar well-tuned for the right man to come into her life. Plus, she’s a lot of fun.

Once I settle on the core of the story, I like to have a beginning and where I think it will end. But generally I let it flow, as various characters get involved and I discover more about them and their place in the scheme of things. Also, Belinda and Hazel are developing so I like to be fluid when writing to enable them to tell me more about themselves. As each story has an historical item or event as its core, I do a lot of research, and often ideas that are new to me, come out of that research.

I have started on Book Seven, ILLUSION OF DEATH which is set on Belinda’s hometown of Melbourne, Australia as was Book Five, A WICKED DESIGN. This time, Belinda is recovering from a broken romance and she and Hazel holiday in the city. The plot concerns evidence of an early film made in Melbourne last century and the two women get caught up in the intrigue and machinations created by opposing parties who have a vested interest in the old film and its restoration.

I prefer Physical but admit eBooks are convenient and that suits my needs at the moment, certainly for light entertainment and biographies. For more serious works, I find it uncomfortable to read electronically.

The industry has changed, and I believe traditional publishers have lost the plot. They don’t seem to know how to deal with eBooks and the number of authors who are self-publishing. There are distinct advantages for an author to self-publish, in essence, cutting out the middle man. Agents and publishers don’t seem to have their fingers on the pulse of what readers want, and so let potential money-makers for them slip through those fingers.

Do it. Just that, do it. Self-publish if you wish. If your writing strikes a chord with readers, then it will be worth it. Nothing is easy but there is no point in giving up. They say ‘write what you know about’. I say, write what you want to write about. They also say ‘you’ve either got it, or you ain’t’. There’s only one way for a writer to find out. Publish and be damned! And have fun!

Thank you so much Brian, there is so much valuable information in your interview. I have really enjoyed listening to you.

Those who'd like to know more, please check out Brian here:

Thanks again readers for dropping in. If you'd like to be interviewed for this blog or have an interesting story to tell please drop me a line.