Today I have with me Isobel Blackthorn, the author of A Perfect Square.

Isobel Blackthorn was born in London in 1962 and has spent much of her life in Australia. She's also lived in Spain and Lanzarote (Canary Islands). She's been a teacher, market trader, project manager and PA to a literary agent. She received her PhD in Social Ecology in 2006. She now lives on the far south coast of New South Wales, Australia, where she follows her passions for social justice, philosophy, current affairs, books and art.

Isobel is the author of a collection of short stories, All Because of You (Ginninderra Press), and the acclaimed novel, Asylum, and her latest release, The Drago Tree. Her writing has appeared in e-journals in Australia and the US.


Can you tell us a bit about you as an author? 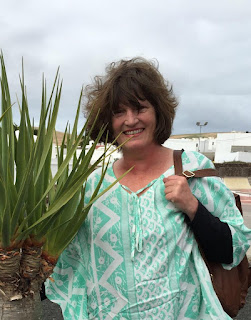 I harboured a wish to be an author when I was just eleven years old. But I had no self-confidence and no support. So I went off and got a degree, had kids, became a high school teacher, then went on to do a PhD. After all that, in 2007 I got a job as PA to a literary agent. It was she who urged me to write creatively. By then I was 45. After a shaky start and a lot of personal upheaval I am now a dedicated author, brimming with stories.

What are the hardest part of being an author?
Fiction writing puts you in a shadow world, one in which the characters inhabiting you are more real than ordinary reality. At first that’s the hardest part of being a writer—making that happen, sustaining that reality. But as soon as the publishing side of things starts to happen, things shift, and suddenly the life of an author is all about marketing and public appearances and relentless self-promotion. The co-existence of these two realities within one individual is challenging.
What do you enjoy most about being an author?

I enjoy living with my characters, inhabiting the worlds conjured out of a few little ideas. It’s a very private joy and one filled with uncertainty because I have no idea if anyone else will like what I’ve written. When a reader comes along and tells me how much they have enjoyed my writing, that private joy is suddenly shared, and with it comes both relief and a sense that all that slaving away really is worthwhile. That me, along with all the other authors out there, really can tell a story. I think all the creative arts are like this. There’s such a sense of doubt that pervades it all.

What authors/books have had an influence on your writing?
Iain Banks has had the biggest influence on my writing. I began with The Wasp Factory back in the 1980s. What an imagination! Most of all, I appreciate the way he doesn’t shy away from topics that are repellent. He creates really interesting characters and carefully woven and twisted plot lines. His Sci Fi aside, he hovered on the fringes of the genres, playing with them but never bending the will of his muse to their strictures.

Do you ever get Writer’s Block? If so, how do you deal with it? Do you believe there is such a thing?
No, I don’t. I have waited far too long for this chance to devote myself to writing. Life’s too short. I don’t waste a day. If I’m stuck on one thing, I turn to something else.

Do you have a particular place that you like to write?
I compose my handwritten drafts on the living room couch. I’m either there, on here at my desk. I cannot write anywhere else. Consequently, I don’t like going out.

Do you have a favourite time of day to write?
I find the mornings are best. And late afternoon. I’m too tired in the evenings and just want to switch off.

How do you like to reach your readers? (Social media? Book signings? Blogs etc)
I am always on social media. I’m a blogger and big on Facebook. When I have a new release I like to go out and reach as many of my existing readers as I can. And new ones! Because I’m currently living in Australia, this can mean travelling big distances too. 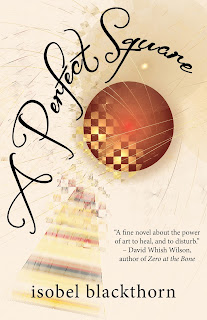 Can you tell us about your latest book? (is it part of a series, genre)
A Perfect Square is a literary mystery/thriller. It’s written from three points of view but the protagonist is pianist, Ginny Smith. She’s just returned to live with her mother in the Dandenong Ranges east of Melbourne. Having just left her boyfriend, she’s not in a good space, and her mother, eccentric artist, Harriet, is desperate to cheer her up. So she suggests they collaborate on an exhibition of paintings and music. Ginny is plagued with questions as to the whereabouts of her father, whom she hasn’t seen since she was seven. There’s a parallel narrative, set in Exeter, in which another mother is wracked with concern for her daughter.

The story behind A Perfect Square is special for me personally, since it is based on ideas contained in my PhD and on my daughter’s Honours thesis in Music. Elizabeth Blackthorn has composed the music to go with the book, and there’s a link to that music included in the front pages. That said, the story is not highbrow or pretentious. But there’s a message in there, one I think needs to be told and told and told.

How long did it take you to write the book?
This book took me a little over a year to complete. For me, this is fast. The story poured out of me. And there were parts of it that were already written from a previous work.

What was your process? Did you plot out the entire book, or just let the storyline flow?  Do you write in chronological order?
I began with a few scraps of ideas. I knew what the themes would be and I had the characters and a very basic idea of the plot. After that I let the story flow. Before long the story took over and I was no longer in the lead. The story jumps around in time. Some readers don’t like that, but I found it necessary. It was the way the story needed to be told.

Do you have plans for further instalments?
This story is a one off. I cannot imagine I’d take it further. Although I suspect there is another story that could evolve. But I’m not sure I’m ready to go there just yet. Maybe ten years from now.

Do you have a plan for your next book?
I’m currently at work on a cosy crime series set on Lanzarote. The series is based on characters whom first appeared in an earlier work, The Drago Tree, which was released last year.

Ebooks vs Physical books? Do you have a preference when reading?
I used to be a stickler for paperbacks. Now, I don’t mind.

Self-publishing vs traditional publishing? What are your thoughts? Do you feel that the industry is changing?
The most exciting thing happening in publishing today is the rise of small presses. I think traditional publishing has become too big, too corporate, too profit driven. They are interested in what is marketable, what sells. Small presses will take a chance on originality, on literary works that may not be so profitable, on emerging authors rather than big names. Print on Demand services are now opening up big possibilities for small presses, who no longer need the capital for print runs. I think PoD challengers the distributors and booksellers who between them currently take the lion’s share of the price of a book. I predict that Print on Demand is going to revolutionise the book industry.


My advice to aspiring authors is simple: write. Write every single day. Don’t just surround yourself with your favourite authors, seek out writers whose works are challenging, who write in different styles and voices. Study the works of others, for structure, syntax, voice, and techniques for writing dialogue, description, action and reflection. It takes between 5 to 10 years to get good at writing. So don’t give up.

Thank you so much for dropping by. Good luck with your new release, A Perfect Square.

Where can readers visit your work?

Thanks again to Isobel for today's interview,

If you'd like to be a featured writer, filmmaker or the like, please drop me a line. Please don't forget to also subscribe to keep in touch with the series.