Hey Everyone,
Thanks for joining us again this week. 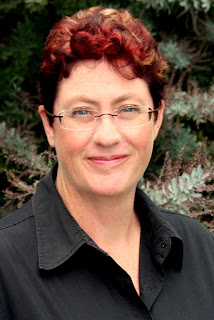 This week, I am interviewing Leonie Rogers.

Growing up in Western Australia, Leonie was an avid reader from an early age. Her mother vividly recalls her stating “I can read faster with my eyes than you can with your mouth, Mum…” at around the age of six. Her parents and great aunt encouraged her interest in literature, providing her with books of many different genres, and . She began writing during high school, placing in the Western Australian Young Writers Award in 1980, and she fondly remembers several of her English teachers, who encouraged her to write, both fiction and poetry.

Leonie trained at Curtin University as a physiotherapist and moved to the remote north west of Western Australia, as a new graduate, in late 1986. She continued to write poetry for herself and for friends. Living in the remote northwest, she had the opportunity to work with camels, fight fires as a volunteer fire fighter, and develop vertical rescue and cyclone operation skills with the State Emergency Service.

After relocating to NSW with her husband and two children, Leonie continued to work as a physiotherapist, while still dabbling with writing. Finally deciding to stop procrastinating, Leonie decided to write the novel she’d had sitting in the back of her head for the last twenty years. Her husband and two teenage children have been extremely tolerant of the amount of time she has devoted to writing in the last few years.

I’ve always written, however there was a bit of a hiatus when the kids came along. Fortunately, or unfortunately, I required a knee reconstruction after a skiing accident, and finally had enough time to write the book I’d been thinking about for twenty years. It’s now published, and called Frontier Incursion - Book 1 of the Frontier Trilogy.. It’s officially YA Sci-fi, but seems to read well with most ages and also cat lovers.

What are the hardest parts of being an author?

The hardest part for me, is simply having enough time to write as much as I’d like too!

I love it when the ideas flow, and the story unfolds itself. I also love people enjoying my work - I know how much joy other authors have brought into my own life, and to provide such enjoyment for others is a privilege.

C.S.Lewis said he wrote the books he wanted to read. I think that was excellent advice. I also suspect that pretty well every author I’ve ever read has had some kind of influence on the way I write in some way or other.

I’m not sure it’s Writer’s Block as such, but more a moment in the story when I’m not quite certain which direction to take. Usually I either write something different, or just work my way slowly through dialogue and see what the characters think about what’s going on. Subsequent drafts are for fixing what doesn’t work.

I usually write at home, but I really enjoy writing in cafes and on long car trips in the car. (I am not the one driving at the time!) Sometimes I park myself and my laptop in one of the local cafes and just write and drink coffee.

Morning’s are good, and afternoons, and evenings :)

I like to reach my readers on social media, and also face to face where possible. I live in a rural area, so social media works well. I hang around on Facebook and Twitter, and love being on Goodreads. I also blog. 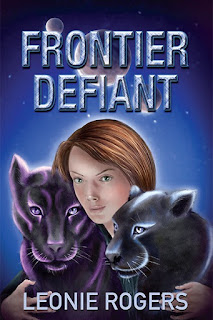 My latest book is called Frontier Defiant, and it’s the last instalment of the Frontier Trilogy. It’s officially YA sci-fi, and features, Shanna, her starcats, and invading aliens.

Definately probably took about six months in first draft form, but then there were the other drafts…

The Frontier books are full of starcats - glow in the dark one hundred kilogram cats. I actually wish they were real, and apparently so do my readers. I love writing them, because they’re super cat-like, but even more special. They can vanish at will, travel rapidly, and protect their friends from the dangerous wildlife of Frontier. However, they do like to sleep on the bed, just like normal cats, so it might be problematic if they were real.

I’m a combination panster/planner. I always know the beginning and the end, but what happens in the middle happens as I write it. I generally have a few things I know need to happen along the way, but for me it’s a bit like watching a movie unfold. I see the pictures inside my head and then I write them down. Sometimes I have to go back and delete a few.

There are a few Frontier plots rumbling around inside my head, and I think I will be revisiting the characters sometime in the future, but for the moment I’m working on a completely different project.

My next book is already written, and I’m part way through the second one in that series. It’s a fantasy this time, and will also (at this point) be a trilogy. I’m also part way through writing a space based sci-fi.

None of these have a publisher at this time, but I’m hopeful. My test readers have enjoyed them, and have been helpful in refining them.

I love both. I’m mostly reading eBooks at the moment, because they’re so easy to cart around - I can carry hundreds of books in my handbag! Having said that, I love to purchase favourites in physical form so I can enjoy both the lovely cover art and the smell and feel of the paper. On the other hand, when you fall asleep reading a massive book electronically, it doesn’t usually concuss you when you drop it on your head.

I’m traditionally published by small press (My Frontier Series) and also have a couple of short stories in two self published anthologies. I think the industry is changing quite rapidly, and that we don’t really know where it’s going yet.

I suspect that there will be room for all formats in the future, and I think that many self published authors are taking a much more professional approach to their work, which is a credit to them.

I’d suggest that aspiring authors work on the basics - spelling, grammar, showing vs telling. Think about plots, engage with your characters, and have a circle of helpful, honest readers who aren’t afraid to tell you what they really think. And when those same readers tell you what they really think, take it on board, and listen - don’t be offended. As writers, it’s what we all need.

Thank you so much for joining me this week Leonie.

If you'd like to connect with Leonie, you can find her here:

If you'd like to be interviewed for this blog, or have an interesting story to tell, please drop me a line.

Until next week! See ya